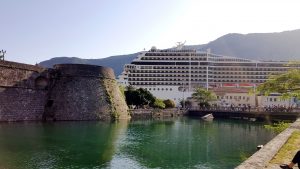 Montenegro is a country of unique beauty and dramatic contrast where the beautiful mountains surround calm emerald waters.


Montenegro is a country of unique beauty and dramatic contrast where the beautiful mountains surround calm emerald waters.
Located in the south-eastern Adriatic, it has a coastline of 295 km. There are 120 beaches, with lots of Blue Flags to visit and enjoy. Montenegro is characterized by a mix of various cultural influences of the various successive occupations, Venetians, Ottomans and Hapsburgs that make it particularly attractive thanks to a great cultural diversity, with a mixture of frenetic cities and sleepy villages, new places where wealth the capital R is normally.
In Budva, whitewashed houses with sun-baked roofs are a perfect Mediterrean scene, the medieval citadel (Stari Grad) is then full of history in all its parts. Kotor is characterized by the fact that the whole old city is walled up and this is unique on the Montenegrin coast.
A UNESCO world heritage site for almost 40 years.
In the evening the city comes alive, as well as Budva, with a lively nightlife full of ideal places for meetings for all ages. Further north is the Lustica peninsula facing Tivat, a town famous for its pleasant beaches. Tivat (Porto Montenegro) is a unique world-class international docking and tourism port with countless super-luxury boats, which often cost several million euros.
The Kotor Bay is the true jewel of Montenegro. Here, looming mountains meet the Mediterranean, and a 28-kilometer bay stretches inward between the peaks., This submerged river valley is home to many towns and villages, including the fortified town of Kotor, the namesake of the bay . It was once owned by the Venetians, and the influence of the Venetian Republic is very evident both in the architecture but also and especially in the kitchen that shows a particular attachment to Italian flavors.

Arrival at the airport in Dubrovnik in the late morning.
Free time for lunch / snack.
Departure for Herceg Novi (New Castle) Montenegro town far from the tourist crowds.
We will visit a part of the old town, the small convent of the Church of St. Leopoldo Mandic and also the Church of St. Girolamo.
After the visit we will go to the hotel by crossing the strait by ferry.
Dinner and overnight at hotel in Budva.

Breakfast at the hotel.
Following the old road with 25 hairpin bends (we also take a photo break from where we can see from the top of the Bocche di Cattaro bay) we reach Njegusi, a village where we can stop for coffee and snacks (for those who want there are sandwiches with ham and Montenegro cheese (called njegusi).
After the snack stop we will leave for Cetigne the ancient Montenegro capital, situated on a plateau of the Lovcen plateau, surrounded by karst hills that represent a natural defensive wall, which streets, palaces and monuments testify to a glorious past of the ancient Montenegrin capital. Here was born our Queen Elena of Montenegro, wife of Vittorio Emanuele III.
We will visit the town and the museum of King Nicholas, pope of the Italian queen Elena.
Free time for snacks / lunch.
Departure for Budva-the city was mentioned for the first time in the 5th century BC as an Illyrian settlement, although it was probably already a Greek emporium from the 10th century BC, with the name of Buthoe. Budva was later conquered by the Romans and in the Middle Ages it was subjected, with ups and downs and various dominations.
Later it became a bishop's seat under the name of Butua or Budua. Starting from 1442 the city became part of the Venetian Republic and part of the so-called Venetian Albania and remained there until 1797, except for a short period in which it was deceived by the corsican Uluç Alì Pascià.
The old town of Budva, also known as the 'theater city' is characterized by a typically Mediterranean architecture which, as in nearby Dalmatia, is influenced by the influence of Venetian domination; it rises on an islet connected to the mainland by a strip of sand that eventually became a peninsula.It is surrounded by 15th century bastions that form a medieval fortification system with gates, defensive walls and towers.
The narrow, winding streets, squares, churches and fortresses offer an evocative atmosphere that in many ways resembles our Italian villages.
Dinner and overnight at hotel in Budva.

Breakfast at the hotel.
Departure to Lake Scutari - located in the south of the country, on the border with Albania with which is divided and precisely crossed by the border, the largest lake in the Balkans. Around it extends a valley, which extends to the northwest in the valley of the river Zeta.
The lake changes its surface according to the seasons, from about 600 square kilometers during the rainy season it goes to about 370 square kilometers during the summer. In the lake, which is a National Park, live around 800 species of algae, 50 species of fish and 270 species of birds, some of which are very rare, such as the curly pelican, the pygmy cormorant and the leaded tern.
We will also visit the visitor information center where you can ask specific explanations on the flora and fauna of the national park.
We will have lunch on the lake based on freshwater fish.
After lunch we leave for the monastic complex Praskvica (or Rezevici) - which due to its treasures and its historical value has been classified as a Cultural and Historical Monument of Montenegro.
In the monastery are preserved frescoes dating back to the sixteenth century with layers of the thirteenth century, precious icons and religious objects, the testimonies of the seven centuries of history during which the monastery was sacked several times by different invaders and when several ancient books and documents were destroyed.
The Statute of Pastrovici was found in Rezevici in 1860, which is believed to be the latest version of the Dusan Code, and is now preserved in Zagreb.
Dinner and overnight at hotel in Budva.

4th-Visit of Lustica and Tivat

Breakfast at the hotel.
Today we will visit a modern Montenegro.
Departure to Lustica - Luštica bay is located along a strip of Adriatic coast in the northwestern bay of Trašte, part of the municipality of Tivat and adjacent to the village of Radovici.
Visit a new, modern cite, the port on the open sea where there is a marina and a modern hotel.
Free time for lunch / snack.
After crossing the city of Tivat, the new luxurious harbor of Tivat (Porto Montenegro) where you will admire boats flying flags of various states of the world costing tens of millions of euros.
Dinner and overnight in Budva.

5th day-Visit of Kotor and Perast

Breakfast at the hotel.
Departure for one of the most beautiful cities of Montenegro, Kotor.
We will visit the old city, the Maritime Museum and the Cathedral of our Saint protector St. Trifone.
Free time for lunch / snack.
Then we arrive at Perast on the other side by ferry, which serves as a link to the nearest point of the strait.
Here we will proceed with the booked boat we will visit the Sanctuary of the Madonna of the Scarpello, enjoying while browsing the beauty of the longest fjord in Europe the Kotor Bay .
They penetrate the coast for 28 km and constitute a harmonious symbiosis between various natural environments and a rich artistic heritage and represent the largest fjord in the Mediterranean and certainly the most fascinating.
Surrounded by the slopes of the Lovcen and Vermac mountains and the Lovcen and Orjen National Park.
The area includes 12,000 hectares, of which 2600 covered by the sea.
Departure for Dubrovnik and return to your country.

- 4 overnights in double standard room in Hotel 4*
- 4 buffet breakfast in hotel;
- 4 buffet dinners in restaurant in hotel (included water 0.50 l. and 1 glass of wine or one beer p.pax.) coffee and other exluded;
- Last day lunch at the lake of Shkoder.
- Transporti with bus with expert albanian driver .
- Tourist guide in english language for all the program.
- Proffesional guide extra in english language for the days in Montenegro;
- Entrance fees included in price for the visit of museums in Montenegro as mentioned in this program:
-One free of payment, for 25 pax paying. (the 26° don’t pay).
-Entrance fees included in price.
-Centinje: Museum of King Nicola;
-Monastic Complex Praskvica;
-Cathedral St. Trifone;
-Marittim Museum in Kotor;
-Madonna of Scarpello in Perast;
-Lake di Shkoder: Entrance fees for the parc;
-Daily taxes for the staying in all the cities;

QUOTES DO NOT INCLUDE:

The package is scheduled with arrival at Dubrovnik airport in the late morning of the first day and departure for Italy from Dubrovnik airport in the late afternoon of the last day. Changes in the program resulting from and / or due to delays or other factors not dependent on our will therefore will not be imputable to LivingAlbania and will not be subject to any refunds. If what is involved in additional costs will be assessed and charged to the customer.

1. For entry into Albania it is sufficient to show a valid identity card
2. No health prevention is necessary. The only precaution is to avoid drinking tap water, better to use bottled water.
3. It is recommended for visits to the places indicated sports shoes with sole with a little 'tank, practical clothing "onion".
4. In Montenegro la moneta è l’Euro.

NOTES :
The visit to Santo Stefano is operable but not optimal in our opinion for the time allowed for the visit, both for the excessive cost and for the number of participants. In case you want to consider it we are at your disposal.

The visits are not difficult and demanding, they are quiet and affordable for everyone, but being the ground often in cobblestone and / or in stone sometimes uneven and up and down serves especially to pay attention in walking. It is recommended for visits to the places indicated sports shoes with sole with a little 'tank, and given the season clothing practical "onion".

We will make appropriate "technical stops" during motorway transfers or in facilities where normal physiological needs can be met, usually halfway between one place and another, but in any case every one and a half hours (unless required) details).

Livingalbania has been operating for years in Albania, knows the country as few others and as they say here of us better than an Albanian, also counts in its customers, with its own satisfaction, customers of the "Third Age" thanks to the standard with which it is careful to the needs of people who are no longer young.
Structure description
Hotel in Budva 4* Located in the immediate vicinity of the Stari Grad Budva (old town) within walking distance in just 10-15 minutes ideal for evenings in various clubs.
Excellent general standard. The well-appointed rooms feature flat-screen TVs and minifridges, while upgraded rooms also have terraces. Suites have separate living areas and some have kitchen. The hotel offers a restaurant and a lounge bar. Breakfast and dinner is buffet style.