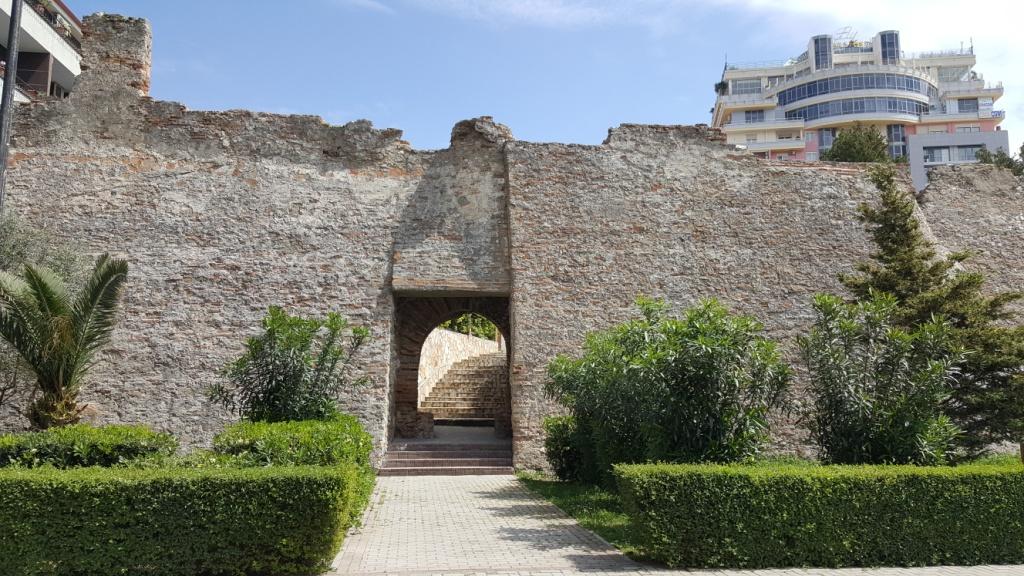 Durrës historically known as Epidamnos and Dyrrachium, is the second most populous city of the Republic of Albania.

Durrës historically known as Epidamnos and Dyrrachium, is the second most populous city of the Republic of Albania. The city is the capital of the surrounding Durrës County, one of 12 constituent counties of the country. By air, it is 165 kilometres (103 miles) northwest of Sarandë, 31 kilometres (19 miles) west of Tirana, 83 kilometres (52 miles) south of Shkodër and 579 kilometres (360 miles) east of Rome. Located on the Adriatic Sea, it is the country's most ancient and economic and historic center.Founded by Greek colonists from Corinth and Corfu under the name of Epidamnos (Greek: Επ?δαμνος) around the 7th century BC, the city essentially developed to become significant as it became an integral part of the Roman Empire and its successor the Byzantine Empire. The Via Egnatia, the continuation of the Via Appia, started in the city and led across the interior of the Balkan Peninsula to Constantinople in the east. In the Middle Ages, it was contested between Bulgarian, Venetian and Ottoman dominions.Following the Albanian Declaration of Independence, the city served as the capital of the Principality of Albania for a short period of time. Subsequently, it was annexed by the Kingdom of Italy and Nazi Germany in the interwar period. Moreover, the city experienced a strong expansion in its demography and economic activity during the Communism in Albania.Durrës is served by the Port of Durrës, one of the largest on the Adriatic Sea, which connects the city to Italy and other neighbouring countries. Its most considerable attraction is the Amphitheatre of Durrës that is included on the tentative list of Albania for designation as a UNESCOWorld Heritage site. Once having a capacity for 20,000 people, it is the largest amphitheatre in the Balkan Peninsula.

One of the city's main sights is the Byzantine city wall, also called Durrës Castle, while the largest amphitheatre in the Balkans is found close to the city's harbour. This fifth-century construction is currently under consideration for inscription as a UNESCO World Heritage site. The theatrical and musical life of the city is constituted by the Aleksandër Moisiu Theatre, the Estrada Theater, a puppet theater, and the philharmonic orchestra. The International Film Summerfest of Durrës, founded in 2008, has since takes place every year in late August or early September in Durrës Amphitheatre. In 2004 and 2009 Miss Globe International was held in Durrës.The city is home to different architectural styles that represent influential periods in its history. The architecture is influenced by Illyrian, Greek, Roman and Italian architecture. In the 21st century, part of Durrës has turned into a modernist city, with large blocks of flats, modern new buildings, new shopping centres and many green spaces.

Durrës is home to the largest archaeological museum in the country, the Durrës Archaeological Museum, located near the beach. North of the museum are the sixth-century Byzantine walls constructed after the Visigoth invasion of 481. The bulk of the museum consists of artifacts found in the nearby ancient site of Dyrrhachium and includes an extensive collection from the Illyrian, Ancient Greek, Hellenistic and Roman periods. Items of major note include Roman funeral steles and stone sarcophagi, an elliptical colourful mosaic measuring 17 by 10 feet, referred to as The Beauty of Durrës, and a collection of miniature busts of Venus, testament to the time when Durrës was a centre of worship of the goddess. There are several further museums such as the Royal Villa of Durrës and the Museum of History (the house of Aleksandër Moisiu).

Located right in the center of the city, a few steps from the Town Hall, it was brought to light by the archaeologist Vangjel Toçi. To date only half has been brought to the surface. The amphitheater has an elliptical shape with a perimeter of 136m, and the height of 20m.Unique of this type in Albania and among the largest in the ancient world can be compared to those of Pula and Pompeii.Reference to the I -2rd century BC could hold fifteen thousand spectators and it is believed that the arena could host fights engaging up to twelve pairs of gladiators. In the seventh century, after the disused fall of the complex, the arena was transformed into a cemetery and one of the galleries was converted into a chapel , this decorated with frescoes and mosaics, still visible. During the earthquake of 1273 the amphitheater underwent heavy damages.

An author of the 6th century AD, attributed to the Byzantine emperor Anastasio I the construction of three circles of fortifications, but today the third circle does not remain track.They are built in bricks and mortar with a perimeter calculated in 4400m and a height that in some sections reaches 12 m. Some of these are decorated with crosses and arches in relief. Some of the bricks of the building have stamps with the monogram of Anastasio or Giustiniano, or Christian symbols. After the dams caused by the earthquake of 1273, Angoini and Veneziani carried out repair work.

The for and placed close to the current Piazza del Muncipio, and in the center of the ancient Durres. Datable from the materials found between the 4th and 6th centuries, it has a circular colonnade with a radius of 18m that borders a central paved area. in marble slabs, in the middle of which there is a stepped octagonal basement and a well. In its part of public representation, the building is entirely made of Greek marble from the island of Proconneso in the Sea of Marmara, here imported from Anastas I or Justinian.

On the Town Hall Square stands the new mosque built in 1938 and renovated between 1992 and 2006. Alongside the building are the Islamic cultural center and the Koranic school.