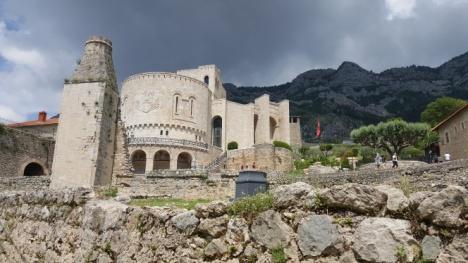 Krujë is a town and a municipality in north central Albania. Located between Mount Krujë and the Ishëm River, the city is only 20 km north from the capital of Albania, Tirana.
Rich in history and tradition, Kruja is home of the patriots and the epicenter of Albania’s independence from the Ottoman Empire. It was here that Gjergj Kastriot Skanderbeg, Albania’s greatest national hero, defended the country from the invasion of the Ottomans. The National Museum dedicated to the hero is housed in the famous Kruja Castle and shows both the legendary hero’s history and the traditional way of life of the city’s population. The city’s famous bazaar serves as a bridge between this glorious past and the present, offering a rich array of traditional products made from local artisans. Home to one of the spiritual centers of the country, that of Sarisalltik, Kruja is a crucial destination for every local and visitor!

The name of the city is related to the Albanian word kroi, krua, meaning "fountain".The city was attested for the first time as Kroai in Byzantine documents of the early 7th century.In medieval Latin it was known as Croia, Croya and Croarum. During the Ottoman era it was also known as Ak Hisar or Akçahisar from the Turkish words ak (white) and hisar (castle).

The museums of Krujë include the Skanderbeg museum and the national ethnographic museum.
The Skanderbeg museum, founded in 1982, was built in the environs of the Krujë castle. Its collection includes mostly 15th century artifacts related to the Albanian-Ottoman wars, during which the castle was besieged four times by the Ottoman army. The national ethnographic museum of Krujë was founded in 1989 and is located in a 15–6 room villa of the Toptani family built in 1764. The main exhibits of the museum are objects of artisanship, whose age varies from 60 to 500 years.

The Krujë castle (Albanian: Kalaja e Krujës) is a castle in the city of Krujë, Albania and the center of Skanderbeg's rebellion against the Ottoman Empire. Inside the castle is the Teqe of Dollme of the Bektashi (an Islamic Sufi sect), the National Skanderbeg Museum, the remains of the Fatih Sultan Mehmed mosque and its minaret, an ethnographic museum and a Turkish bath.
During the Albanian Revolt of 1432-1436 the city was unsuccessfully besieged by Andrea Thopia and Ottoman rule was restored. After Skanderbeg's rebellion in 1443 the castle withstood three massive sieges from the Turks respectively in 1450, 1466 and 1467 with garrisons usually no larger than 2,000-3,000 men under Skanderbeg's command. Mehmed II "The Conqueror" himself could not break the castle's small defenses until 1478, 10 years after the death of Skanderbeg.
Today it is a center of tourism in Albania, and a source of inspiration to Albanians. Krujë Castle is situated at an elevation of 557 metres (1,827 ft).