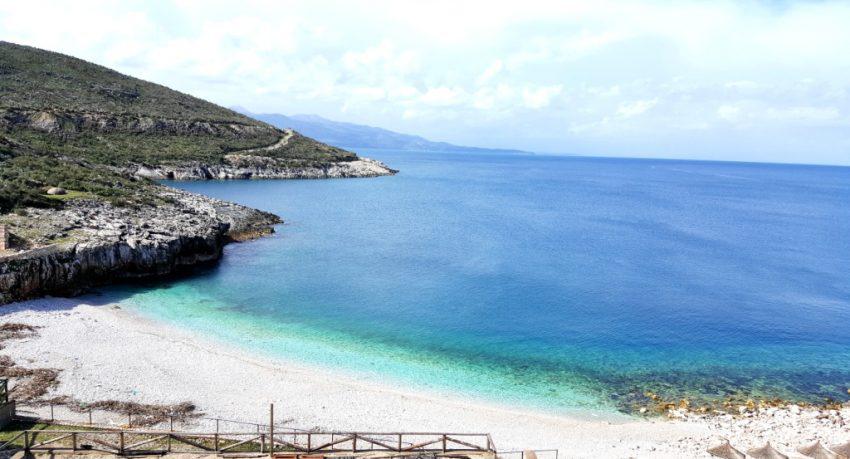 Sarandë, in Italian Santi Quaranta and from 1940 to 1944 Porto Edda in honor of Edda Ciano Mussolini (in Albanian Sarandë

Sarandë, also simply Saranda, is a coastal town in Albania. Geographically, it is situated on an open sea gulf of the Ionian Sea in the central Mediterranean, about 14 km (8.7 mi) east of the northern end of the island of Corfu. Stretching along the Albanian Ionian Sea Coast, Saranda typically has over 300 sunny days a year.


The city is known for its blue deep waters of the Mediterranean. Near Sarandë are the remains of the ancient city of Butrint, a UNESCO World Heritage site. In recent years, Saranda has seen a steady increase in tourists, many of them coming by cruise ship. Visitors are attracted by the natural environment of Saranda and its archaeological sites. Sarandë has a large Greek population and is considered one of the two centers of the Greek minority in Albania.

The history of name

Saranda is from the name of the Byzantine monastery of the Agioi Saranda ,meaning the "Forty Saints", in honor of the Forty Martyrs of Sebaste. Under Ottoman rule, the town in the Turkish language became known as Aya Sarandi and then Sarandoz. Owing to Venetian influence in the region, it often appeared under its Italian name Santi Quaranta on Western maps.This usage continued even after the establishment of the Principality of Albania, owing to the first Italian occupation of the region. During the Italian occupation of Albania in World War II, Benito Mussolini changed the name to Porto Edda, in honor of his eldest daughter. Following the restoration of Albanian independence, the city employed its Albanian name Saranda.

Tourism is the main driver of the economy of Sarandë. It is a significant tourist destination on the Ionian Sea, and by far one of the most popular destination in Albania. It's a prosperous region with varied attractions, plants and mountains, rivers and lakes, springs and virgin beaches, citrus plantations, olive groves and vineyards, pastures and woods, fish and shellfish farming, desirable hunting places. In short, the right place for the development of tourism. Saranda's stony beaches are quite decent and there are plenty of sights in and around town, including the mesmerising ancient archaeological site of Butrint and the hypnotic Blue Eye Spring. Between Saranda and Butrint, the lovely beaches and islands of Ksamil are perfect for a dip after a day of exploring.

Butrint  was an ancient Greek and later Roman city and bishopric in Epirus. Inhabited since prehistoric times, Buthrotum was a city of the Greek tribe of the Chaonians, later a Roman colony and a bishopric. It entered into decline in Late Antiquity, before being abandoned during the Middle Ages after a major earthquake flooded most of the city. In modern times it is an archeological site in Vlorë County, Albania, some 14 kilometres south of Sarandë and close to the Greek border. It is located on a hill overlooking the Vivari Channel and is part of the Butrint National Park. Today Bouthrotum is a Latin Catholic titular see.The city is considered as one of the most important archaeological sites in Albania. On the strength of the immense wealth of cultural, historical and naturalvalue with a considerable history, Butrint was declared a UNESCO World Heritage site in 1992 and further a National Park in 2000.