Tirana is the capital city of the Republic of Albania.


Tirana is located in the center of Albania and is enclosed by mountains and hills, with Dajt on the east and a slight valley on the northwest overlooking the Adriatic Sea in the distance. Due to its location within the Plain of Tirana and the close proximity to the Mediterranean Sea, the city is particularly influenced by a Mediterranean seasonal climate. It is among the wettest and sunniest cities in Europe, with 2,544 hours of sun per year.

Tirana is the most important economic, financial, political and trade center in Albania due to its significant location in the center of the country and its modern air, maritime, rail and road transportation. It is the seat of power of the Government of Albania, with the official residences of the President and Prime Minister of Albania, and the Parliament of Albania.
The Skanderbeg Square (Albanian: Sheshi Skënderbej) is the main plaza in the centre of Tirana, Albania. The square is named after the Albanian national hero Gjergj Kastrioti Skënderbeu. The total area is about 40.000 square metres. The Skanderbeg Monument dominates the square.
During the Italian invasion of Albania, the city plan for Tirana was designed by Florestano Di Fausto and Armando Brasini in a Neo-Renaissance style with articulate angular solutions and giant order fascias.Many buildings including the Tirana International Hotel, the Palace of Culture, the National Opera, the National Library, the National Bank, the Ethem Bey Mosque, the Clock Tower, the City Hall, the Ministry of Infrastructure, the Ministry of Agriculture, the Ministry of Economy, the Ministry of Energy, and the National Historical Museum are situated at the square. 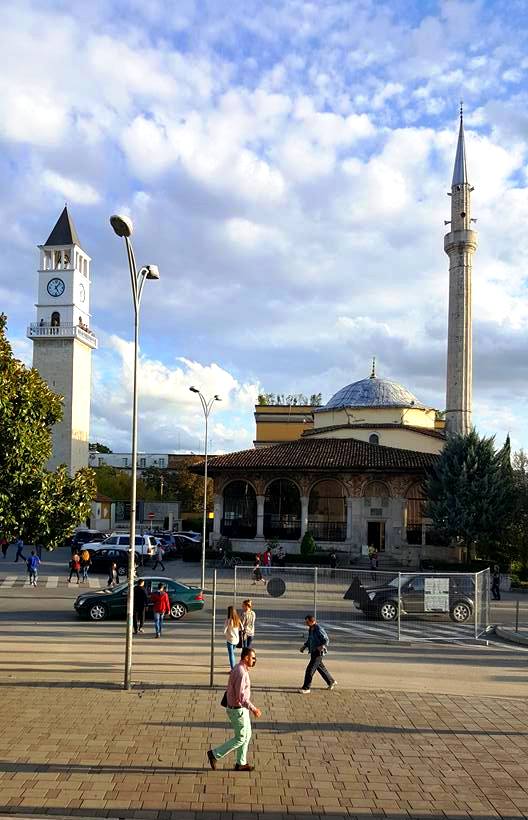 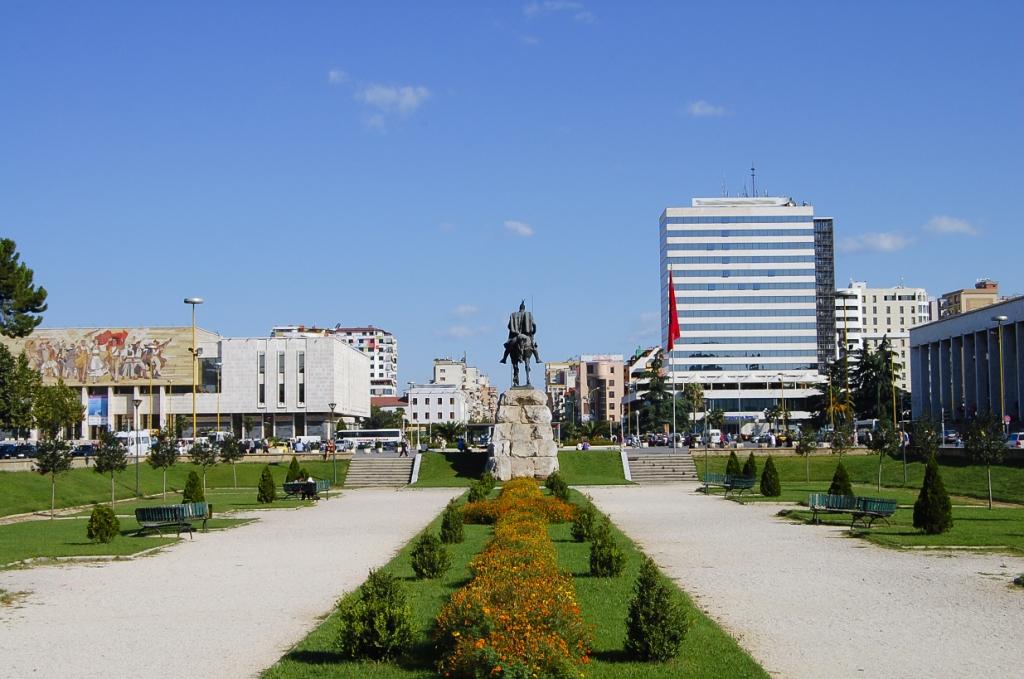 A few meters from the statue of the national hero Skanderbeg (paladin against the Ottoman invasion) is the city’s main mosque 'Xhamia Et’hem Beu'. When it was closed during the period of the communist dictatorship many citizens continued to identify it as a center of worship defying the authorities and making it the symbol of the rebirth of religious liberties in Albania.
Near the mosque you can admire the Clock Tower, built in 1822 by Haxhi Et`hem Bey. Its spiral staircases have ninety steps and lead to the top of the building, 35 meters high .Access to the top of the tower is free and is the ideal spot to observe the entire square from above.
Always overlooking Skanderbeg Square you will find the National Historical Museum or 'Muzeu Historik Kombëtar': the large mosaic on its facade is a vivid example of socialist realism of strong impact for those who pose for the first time the look on the large building; represents the eternal struggle of the Albanian people in defense of their freedom. The National Historical Museum collects an exhibition of images and relics that cover the Albanian historical route from prehistory to the contemporary.
On the south side of the square are the elegant Ministries Palaces that best represent the Italian architecture of the 20s and 30s, near these buildings you will also find neoclassical palaces such as the National Theater, the Marionette Theater and the headquarters of the National Bank. Stroll through these neat and upturned streets so as not to miss any architectural beauty of this elegant area.
Walking instead from Skanderbeg Square towards Bulevardi 'Zhan D’Ark' you will find the “Ura and Tabakeve” Tanners Bridge, an ancient Ottoman bridge on the river Lana dating back to the 18th century.
From the bridge continue towards the 'Blloku' district towards the south of Tirana, following the river with your back to the bridge you will find on your left the imposing 'Pyramid of Tirana'.
This building was originally a museum celebrating the regime, designed in 1988 by the daughter of the communist leader Enver Hoxha; since when, starting from 1991, the historical changes taking place in the country identified it as a building with a contradictory symbolic value, it has repeatedly changed its destination and use.
Since then it has hosted congresses, discos and TV sites, and today, decidedly decadent, it does not lose its controversial fascination with an imposing building with a strong historical value.
Continuing along the river just beyond the Pyramid you will run into the Blloku district, or the “Block of Tirana”. In this neighborhood were the villa of the former communist dictator and those belonging to the highest party officials. Until 1990 the area was off limits to other citizens and was constantly guarded by armed soldiers. Today is the neighborhood of  luxury and trendy bar.
Another interesting exhibition is the Bunk’Art project which has been the protagonist since November 2016, 2 of the “anti-nuclear” bunkers wanted by the dictator Enver Hoxha in the heart of Tirana.
You arrive at its entrance walking inside a still militarized area, in the hilly area just outside the center of Tirana, reachable via Rruga Teki Selenica (you can take a taxi or a shuttle bus that frequently departs from the stop near the Museum of History National). The logo is a semicircle with all the colors of the iris and a star in the red field, symbol of the past, surrounded by the colors of the future and of hope.
A few steps from Skanderbeg Square you will find Bunk’Art 2, the second of the two bunkers used as a museum of memory to the dramas of the regime.
Nearby is the anomalous Orthodox Cathedral of the Resurrection of Christ or “Ngjallja e Krishtit”, built after the destruction by the communist regime of the previous cathedral. Completed in 2011, it is the third largest Orthodox cathedral in Europe, majestic and imposing both from the outside and inside.
If ,to the end of your visit to the city you want to see a more relaxed cross-section of city life in Tirana walks to the large park that lies beyond the hill behind Piazza Madre Teresa, in the far south of the city. “Parku i Madh Kodrat” is a placid park on the banks of the 'Liqenit artificial' lake: here you will see many young people studying outdoors (the park is near a university area), seniors playing traditional musical instruments to relax and athletes devoted to rowing.
We recommend a out-of-town visit to Mount Dajti and a visit to the north-east district of Ali Demi where the Word Center of the Bektashi religion is located. Below the mosque you can visit the museum that traces the whole history of this religious order, a sect of dervishes that fuses Islamic faith and philosophy.