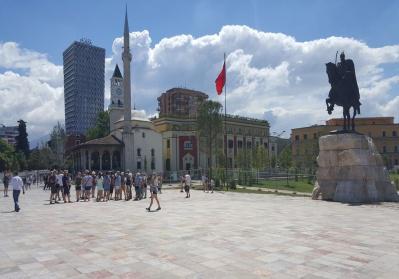 - Arrival and accommodation in a 3/4 * hotel in the Plazh (Durrres beach).
In the afternoon visit of Durres: second city of Albania (about 220,000 inhabitants) is home to the most important port in the country, an obligatory transit point for various cities in Albania.
Durrës founded by the Illyrians in the XIII century BC, expanded considerably thanks to the tribe of the Taulants in the 9th century BC that made it the capital, it became an important Roman port (from the Romans it was also known as "Taverna dell'Adriatico") of the which period boasts an interesting amphitheater of the time (the largest of the Balkans), in this period of greatest splendor of the city thanks to the "Via Egnatia" which connected the Adriatic with Constantinople became a strategic transit point for merchants and goods.
Stroll through Durres to the historical sites of the city (Venetian tower, Ottoman walls to the Roman amphitheater (the largest of the Balkans) and visit to the modern city Bashkia Square, Promenade, Boulevard, Santa Lucia Catholic Cathedral).
Free evening.

Breakfast at the hotel.
Transfer to Kruja and visit of this charming town (only 13,500 inhabitants) placed on the side of a mountain, Croia or Kruja in Albanian is the most important city of the Albanian resistance under the guidance of Gjergj Kastrioti "Scanderbeg" in the 15th century fought the Ottomans successfully for over 25 years.
Visit the Scanderbeg Museum in the castle with shopping in the beautiful old bazaar.
Climb up to the tower from where you can admire a splendid view of Kruja and its surroundings.
Free lunch.
The castle of Cruia was built in the 4th century AD on the remains of a previous Illyrian settlement of the III century BC .
Free evening.

Breakfast at the hotel and departure to the city of Berati or Berat in Albanian, the "City of a thousand and one windows".
In this city there are 42 mosque churches, many of which date back to the IV-century, of which few have preserved their original traces over time. Visit the historical and ancient part of the city and the Onufri museum housed in the ancient Orthodox Cathedral of the "Dormition of the Virgin".
Free time for lunch, shopping, etc.
In 2008, the historic center of Berat was declared a UNESCO World Heritage Site, as a "rare example of a well-preserved Ottoman city".
We will visit the ancient district of Mangalemi with the typical Ottoman houses, the Berat Castle, the Onufri museum (named after the 16th century albanian painter of icons) and ancient Orthodox churches.
Return to Durres.
- Free evening.

4th day -RETURN TO YOUR COUNTRY


8.00 am Breakfast at the hotel and departure for your country.


Prices refer to the minimum achievement of the groups of participants expressed in the "PRICES".
For other solutions contact us, we are at your disposal.
In the free days we are at your disposal for any other tours in the cities of Tirana and Shkoder.
The package is scheduled with arrival at the hotel in the late morning of the first day and departing for your country on the morning of the 4th day.
Any changes to the program are to be agreed in advanceand will be quantified based on the new proposed solution.

• Price per person with overnight stay in a double room (twin or double), single bed accommodation not provided.
• Overnight in hotel in 3/4 * Hotel with breakfast.
• Tickets included entrance to the Archaeological Museum of Durres, in the Roman Amphitheater, in the castle of Berat, in the Onufri Museum and in the castle of Skanderbeg in Kruja.
• Accompanist in English for the visit of Durres, Kruja and Berat.
• Tour to visit the cities of Durres, Kruja and Berat with transfers by public or private means for public use.

THE QUOTES DO NOT INCLUDE

-Flights to and from Tirana, and ferry.
-Lunches, dinners, snacks, other drinks with meals, coffee, liqueurs, etc ...
-Extra personal and anything not expressly indicated under "the price includes"
-Single room.
-Gratuities.
-Transfers to and from the airport and / or ferry and / or other locations. -The transfer to and from Tirana airport costs 25 euros each way. Pre-bookable.

NOTE*:
** The distances mentioned are approximate and indicative.

HOW TO BOOK THE STAY?

To confirm send email to info@livingalbania.com, you will be sent a registration form and data to make payment. For your reservation you must pay a deposit of 50% on the amount of your dossier. The Balance of the total amount of your trip, ie the balance of the remaining 50% must be paid no later than 30 days before departure.
Payment will be made by bank transfer. The related data will be sent to you. A paid invoice will be sent upon payment.
Please note that failure to pay the sums and dates referred to above constitutes a resolutive clause expressly such as to determine by the organization the termination of the contract right.

• More than 50 days before the date of arrival: Cancellation without any penalty excluding bank charges incurred.
• From 50 to 31 days before the arrival date: 50% deposit refund.
• Less than 30 days: There are no refunds.

In the impossibility of booking flights or ferry let us know that we will provide you with the necessary information on how to provide.We recommend for visits of Durres and Berat sports shoes with sole with a little tank.

The Hotel is located in Durrës in Plazh (beach) directly on the long sandy beach where you can make endless walks and have a coffee or an aperitif in the many bars of the beach enjoying the scent of the sea and enjoy the beautiful sunsets. It is a 3 * star recently renovated, the rooms are newly furnished, has Wi-Fi, private parking; has sea view rooms with balcony, has one of the best seafood restaurants in the area where you can taste the taste of the sea during your dinners, but also expertly pasta and Italian pizza.