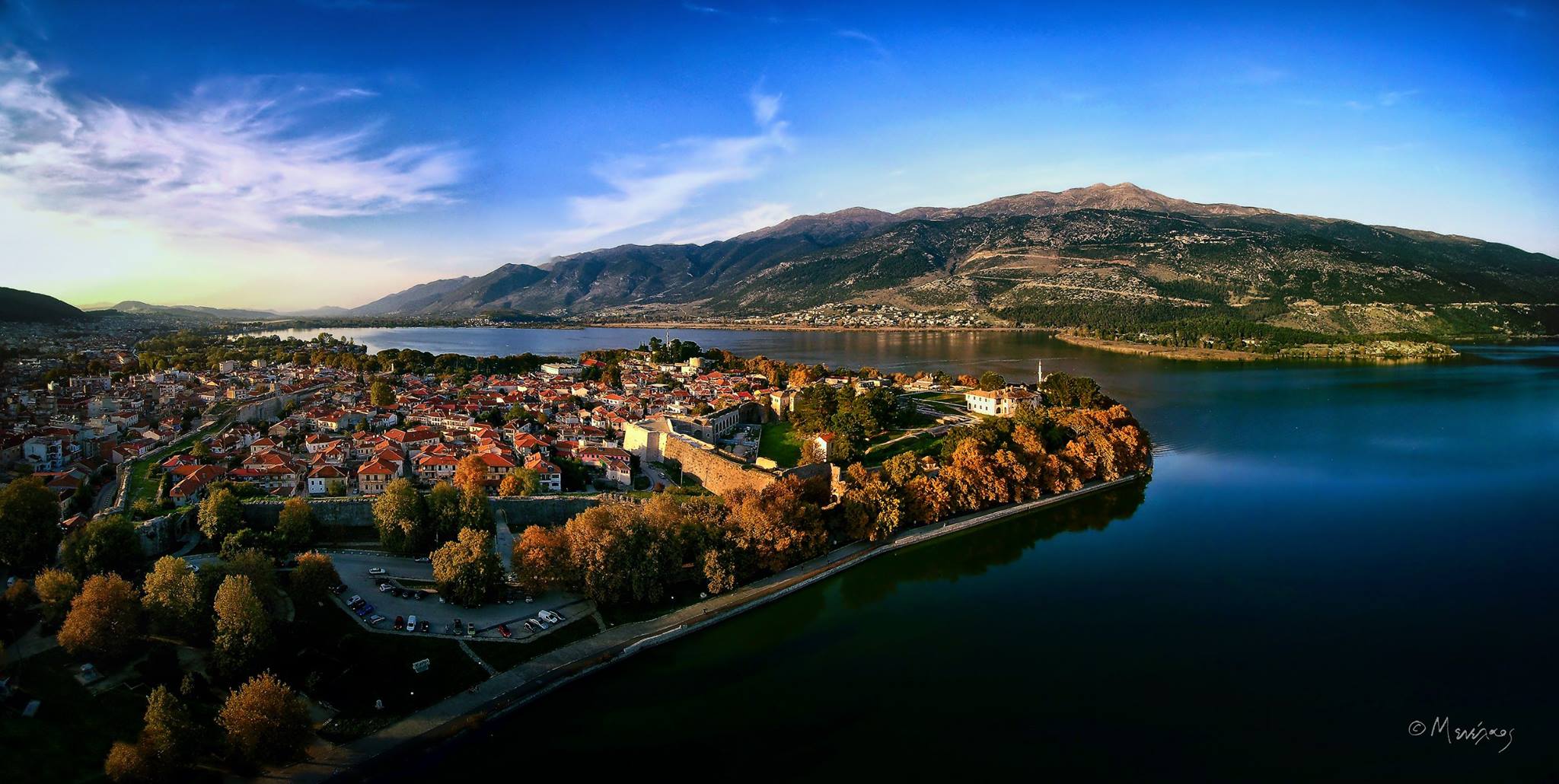 We will have the opportunity to visit Ardenica , the wonderful Orthodox monastic complex, to heading then for the well known tourist city of Saranda placed in front of the island of Corfu.
The following day we will move to Butrint another place under the protection of UNESCO, certainly the most important archaeological site of Albania inserted in a beautiful lagoon, we will do a bit 'of the sea (in addition to that of Durres which is the Adriatic) the Ionian one passing on one of the most beautiful Albanian beaches that of Ksamil, the same day we will cross the border to Greece stopping for the night in Ioannina. Starting from the Epirus region and in particular from Ioannina, capital of the region, we approach the ancient, Byzantine and Ottoman history of the region and then approach the Thessaloniki, where during the visit of Meteora we will discover a natural landscape among the most unusual, where one extraordinary complex of Byzantine art and architecture, in the monasteries built on top of the rocks.
Then Thessaloniki, the second largest city in Greece and an important second capital of the Byzantine Empire and the Ottoman Empire, welcomes us to discover its great historical and cultural importance. Along the journey we will have the opportunity to get closer to the history of the ancient kingdom of Macedonia, with the visit of its capitals Aigai (today Vergina) and Pella. In Vergina we will be struck by the splendor and richness of the findings of the tomb attributed to Philip II, while in Pella we will discover interesting aspects of the civilization that forged a historical figure like Alexander the Great.
Finally we will return from Albania, to go from the cradle of Albanian culture, the town of Korça, where we will have the opportunity to visit the museum of the first Albanian school and also the Museum of Medieval Art one of the most important museum centers in Albania with over 7000 exhibits .

1st day – Arrival and on road to Saranda

Arrival at the airport in Tirana or in the port of Durres.
Departure to Saranda with arrival in Ardenica.
Visit to the monastic complex of Ardenica. Orthodox monastic complex still in use built in 1282 and repeatedly destroyed and recovered and where in 1451 the marriage of Skanderberg, Albanian national hero, was celebrated.
Free time for snacks and / or lunch in a restaurant.
Starting from Saranda with a stop along the road from the first to the Llogora pass to remain amazed with the breathtaking view of the Ionian coast and then to Porto Palermo with a visit to the castle and then a "technical stop" on the seafront of Himare where you can take a good espresso coffee.
Arrival in Saranda.
In the late afternoon arrival in Saranda and walk on the beautiful promenade.


Dinner and overnight at the hotel in Saranda.

Breakfast and departure to the site of Butrint, (World Heritage Site - UNESCO) flagship of Albanian archeology.
Butrint dates back to the 7th century BC and according to Virgil was founded by Eleno son of Priam Re di Troia, the Greeks make Butrint a fortified commercial city (the remains of the acropolis are still visible). Its 6th century BC fortification evokes all the military power of the city and is a symbol of a rich culture and an important and thriving city.
It then became an important Roman colony. It then fell under the dominion of the Venetians and Turks, losing its importance over the course of the century and beginning its decline. The city found (only partly excavated) is a very important microcosm of almost 3,000 years of Mediterranean history.
The visit to the Butrint site is carried out with an official site guide.
Visit to the precious antiquarium (museum) on site.
Free time for snacks and / or lunch in a restaurant.
Short stop in Ksamil on one of the most beautiful Albanian beaches called the "Albanian Bora Bora".
Meeting with the guide to Ioannina and tour of the city, capital of the Epirus region.Ioannina, a city founded probably by the Molossian tribe, is located on the shores of Lake Pamvotis, surrounded by high mountains. Our visit starts from the citadel, the Ic Kale, seat of the government of the notorious Ali Pasha, governor of the region in the Ottoman era.
Hotel accommodation, dinner and overnight.
Dinner and overnight at the hotel.


3rd day-Visit of Kalambaka, Verghina and overnight in Thessaloniki.

Departure after breakfast with our guide in the direction of Kalambaka, at the foot of Meteora.
Among the most spectacular monuments in all of Greece is the Meteora complex: the Byzantine monasteries that the 1300's anchorages built on top of the great rocky pillars. The spiritual development of the monasteries attracted imperial privileges and famous artists who left behind them masterpieces of Byzantine art.
From Kalambaka we start towards Vergina, where we visit the Great Tumulus Museum with the tomb attributed to Philip II: the number, the richness and the quality of the finds are impressive, documenting the development of an extraordinary civilization.
Departure to Thessaloniki, hotel accommodation, dinner and overnight stay.

Breakfast at the hotel.
Visit of Thessaloniki (it was founded in 315 BC by King Cassander, brother-in-law of Alexander the Great and reached the height of glory in ancient times under Roman rule.During the Tetrarchy of Diocletian it was one of the four capitals of the Empire. The Byzantine and Ottoman empires, Thessaloniki was a very important city for the Sephardic Jews, who came here from Spain in 1492).
During our tour we will visit the Imperial complex of the Caesar Galerius with the Rotonda, the Triumphal Arch, and the Palace. Among the Byzantine churches of Thessaloniki, all recognized as monuments of humanity by UNESCO for their exceptional historical and artistic value, we will visit the Agia Sofia, the Acheiropoiitos and the church of the patron saint of the city, San Demetrio.
Passing through the Roman Forum we will close our tour in the heart of the city, Aristotelous square.
Dinner and overnight in Thessaloniki.

5th day – Visit of Pella and overnight in Korça, Albania.

Breakfast and departure from Thessaloniki to Pella, the administrative capital of the ancient kingdom of Macedonia.
During the visit to the site and the archaeological museum, we begin to decipher the sophisticated administrative system and interesting aspects of daily life in the ancient Kingdom of Macedonia.
After the visit ,departure to Korça.
Accommodation in the hotel.Dinner and overnight.

6th day –Visit of Korça and return to your country.

Breakfast in hotel and visit of Korça - the "city of serenades", cultural cradle of the province, once also called "Little Paris" of Albania.
The cultural center of Albania once was Voskopoja (Moscopoli), it has transferred all its culture and wisdom together with many inhabitants right in the city of Korça, this after being burned and destroyed by the Ottomans.
We will visit the city center, the Orthodox Cathedral of the "Resurrection of Christ", the largest in Albania, built in 1992 in place of the old cathedral that was demolished during the communist regime and other hundreds of religious structures as at that time the regime did not allowed no religious profession.
After the cathedral we will go to the museum that recalls the "First Albanian Language School in Albania" opened in 1887 and is located in the center of the city of Korça.
We will also visit the Museum of Medieval Art, one of the most important museum centers in Albania with over 7000 artifacts, mostly icons and works in stone, wood, metal and fabrics created from the early Middle Ages to the early twentieth century. of anonymous and famous artists from different parts of the country. In the main hall there is a collection of icons and objects that reflect the different moments of development of the Albanian iconography and their main representatives. There are works by anonymous authors of c. XIII-XIV and others well known as: Onufri, Onufër Cypriot, Constantine, Jeromonaku, Shpataraku, Selenicasi, Zografi brothers  etc.
Departure for airport in Tirana.
Return to Italy.


QUOTES DO NOT INCLUDE:

-  Air tickets for Albania.
-  Lunches, snacks or other not mentioned.
-  Drinks for the meals (exluded what mentioned in “quotes include”).
-  Drinks, snacks ecc…during the tour.
-  Medical inscurance (obbligatory) supplement.
-  Personal extra and all not mentioned in the “quotes include”.
-  Single room.
-  Tips.
-  All not mentioned in this program.
-  Entry tickets for some museums are excluded, except for those indicated under the heading "The quotas include" because the visit is still subjective and the price varies according to age with obvious savings for the benefit of the tourist (even with half costs for over 65 years of age and for children).
-  Excluding internal guides for sites and museums except those indicated above.
-  Anything else not expressly specified in the program.